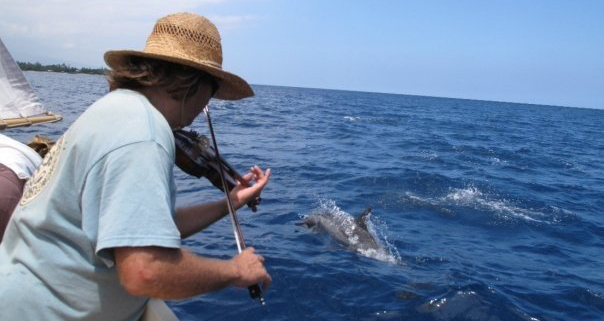 Nelson playing fiddle with the bottlenose dolphins off the coast of Big Island, Hawaii.

Nelson Denman is a cultural arts ecologist. He attended St. John’s College (B.A.) and Harvard University (M.Ed.) He is a founder of the Santa Fe Green Party/ NMGP, composer bandleader for All Species Project, was on the Executive Committee of the northern New Mexico chapter of the Sierra Club. He has taught Deep Ecology, Permaculture and Ecological Design, as well as music to students of all levels, from primary school to university and beyond. He presently is living in Hawaii, where he plays cello in the Kamuela Philharmonic, the University of Hawaii, Hilo Symphony, and performs and teaches guitar, bass, violin and cello in Hawaii, Santa Fe, nationally and internationally.. 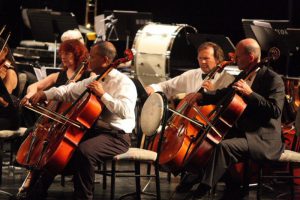 Nelson playing in the Spring 2010 concert of Kamuela Philharmonic Orchestra

Nelson’s musical “The Healing Island” was chosen as an art project of the North Kohala Community Resource Center. He is also the recipient of the St. John’s Award for “Outstanding Contribution to the College Community.” His essay, “The Greening of Harvard” was chosen to be delivered at the First International Greening of the Campus Conference at Ball State University, Muncie, Indiana. Nelson has taught Permaculture locally, nationally and internationally. 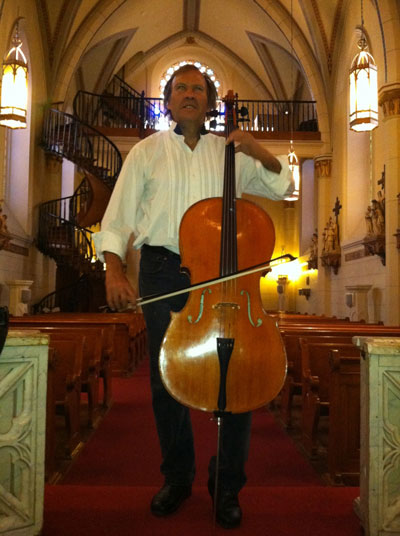 Nelson has collaborated musically with Paul Winter, Larry Littlebird, Peter Kater, Robert Sequoia, Consuelo Luz, Richard Russell and many others. He plays cello on the CD of the World Premiere of Voyages by Paul Cisze. He has completed 2 CDs of music: Earth Doctor, The Chakra Mode Cycle, and is working on Slack Key Cello. Nelson is also a photographer/journalist for the Kohala Mountain News in Hawaii.

Nelson has traveled to Tibet with Roshi Joan Halifax as part of Upaya Zen Center’s Nomad’s clinics, and played during the medical sessions. He has been a guest musician for Santa Fe’s Outside In on the Plaza as well as in elder communities. He enjoys performing in hospitals, schools and retirement homes, bringing music and joy to people that don’t have an easy access to the healing power of music.

One Response to About Nelson